Author Answers: How did you write a whole book? 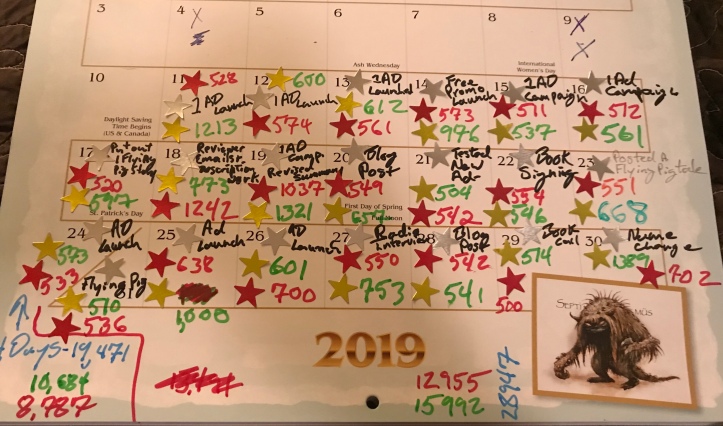 One of the questions I’ve been asked often since I put out my first novel is: “How did you write a whole book? Where did you find the time?” The answer is simple, I spent a bit of time in the evenings, mornings, weekends, and whenever I could find a few spare minutes. Over the course of a year, I produced a novel. One of the tactics I employed involved word counts. I read that novels should run over 60,000 words. In order to reach that number, I set a word target that I worked to write every day. Sometimes I did it, sometimes I didn’t. To be fair, there were long stretches where I didn’t write anything. There were other times I felt particularly inspired, and I hammered out 5,000 words in a day.

More recently, I have taken a more disciplined approach that I learned from a Jerry Seinfeld quote. Seinfeld said that he was successful because he spent time every day writing jokes. He had a calendar where he marked an “x” on every day where he spent a certain amount of time writing. He discovered that the more consecutive days he marked, the harder it was to skip days. Running a streak of 30 or 40 days resulted in progress, but also motivated him to keep working because he didn’t want to break his streak. I applied this idea to exercise goals with great success last year. So, I recently decided to apply it to my writing. I have a small goal: 500 words a day on each project I’m working on (2 right now). Every day, I write my word target before I go to bed, even if it means I stay up late and get up tired the next day. I track my 2 writing goals and a third promotional goal on a calendar that hangs next to my bed. If I hit my goals, I write down how many words I wrote or what I did, and I give myself a star sticker. After 3 weeks of this practice, I had written 28,947 words. That’s roughly half a novel. It wasn’t a huge undertaking. Often, I just spent half an hour per project at different times during the day. The other crazy thing that happened was I ended up writing more than my goal most days. My average per day word count was around 670. So once I got started, I generally overshot my goal. A neat side effect of all of the writing on my two “novels in progress” was that I had ideas far more frequently and the quality of my output improved noticeably. I had been worried that I would run out of ideas, but pointing my brain at the work resulted in me coming up with new material daily. The simple discipline of daily writing time, a little every day, resulted in more progress in less time than I have experienced in any other month of writing before.